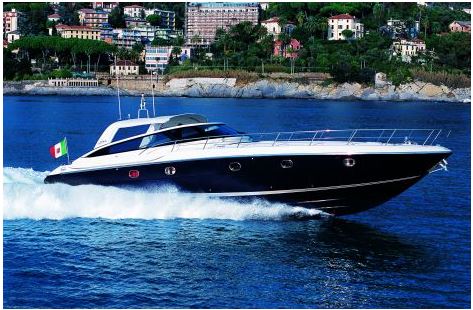 Baia Aqua 54 story – From a plant on Italy’s Gulf of Naples near where the Romans once built their craft, Baia started more than four decades ago building wooden boats, but, over the intervening years, the company has evolved to create a very specific look and style in composite materials. Yachtsmen can easily recognize a Baia in any anchorage because of its long foredeck, sweptback windscreen and au courant hardtop. Under way, the long rooster tail created by Arneson surface drives marks every Baia. Step in behind the sweeping curved blue pod at the helm and twist the ignition keys. The solid rumble from astern is not overly loud, but it clearly says that there are a lot of anxious horses waiting to be unleashed.

Grip the stylish single-spoke steering wheel and gently, ever so gently, massage the MicroCommander throttles forward. Without turning around, you sense that things are happening behind you and, if you’re not used to Arneson drives, you may not want to turn around. At half-throttle, it looks (and sounds) like a tidal wave is hovering over your transom. The best solution is to push the throttles farther forward, twiddle with the Arneson trim rockers until the bow comes down, the long rooster tail stretches out astern, and the Baia Aqua 54 takes off like a bottle rocket. It will be very hard to keep a grin off your face. 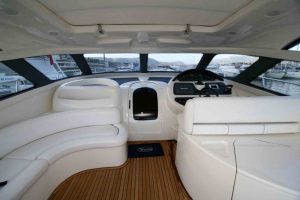 At first glance, the Baia Aqua 54 seems to be all cockpit, starting with an extra-wide teak transom platform that can easily carry a personal watercraft. A curved lounge wraps around the port side of the cockpit but, unfortunately, Italian styling betrays function because the after seat bottom is too wide to let a person of average height lean back comfortably. There is an immense stowage area under the triple-wide lightly bolstered helm seat (it can be an optional crew cabin), and a small cocktail table is to port. The entire area is covered by the hardtop, which has a truly huge opening sunroof. The Baia Aqua 54 is available without the hardtop, but why wouldn’t you order it? It’s the perfect combination of fresh air and weather protection. The saloon is a symphony of dark cherry immersed in layers of gloss, and the sole is unusual since it is planked in cherry. Particularly notable is the absence of any flat surfaces: bulkheads curve sinuously on each side, the settee curls around to face the Panasonic flat-screen television, and even the black granite galley counter is curved.

The master stateroom is forward, with a pleasant mix of cherry and Majilite-upholstered panels around the double berth, which lifts to reveal stowage below. Aft, doors on each side of the companionway lead to the two guest cabins, each with twin berths and a hanging locker. The port cabin has full headroom but, tucked under the helm, the starboard cabin with sitting headroom is best for kids and the mother-in-law. Both cabins share the day head, which has a teak grate for showering and direct access to the port cabin. 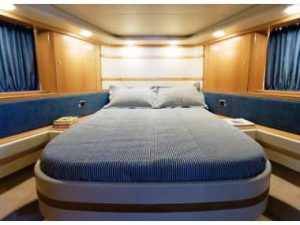 But the real fun in the Baia Aqua 54 is in the running. Yes, the Arneson drives take a bit of learning to get the most out of them but, once you’re acclimated, this yacht is a real giggle. For one thing, the surface props have a grip on the water that seems chain-driven. Shove the throttles forward and the response is riveting: Suddenly you have 20 tons of leather and granite and cherry wood whistling along at breakneck speed. We topped out at 45 knots, which is comfortably over 50 mph, and it was effortless. Even better, it was quietly effortless. Our sound meter never went over 88 dB(A), even at full throttle.

Once you’ve learned the Arneson drives, you’ll find that one benefit of the Baia Aqua 54 is that the boat stays on plane far longer than you’d expect with conventional drives. By using enough power to get solidly onto a plane and then backing off the throttles, we were able to keep the 54 planing down to 1500 rpm, which translates to just 15 knots. Once on plane, the throttle response is immediate. Going from 30 knots to 40 knots is almost instantaneous. And, with that long rooster tail behind you, carving a few long turns just to look back at that wake is almost irresistible.

All in all, the Baia Aqua 54 is a very sexy piece of machinery that combines luxury with speed in a package that is beautifully finished and solidly built.