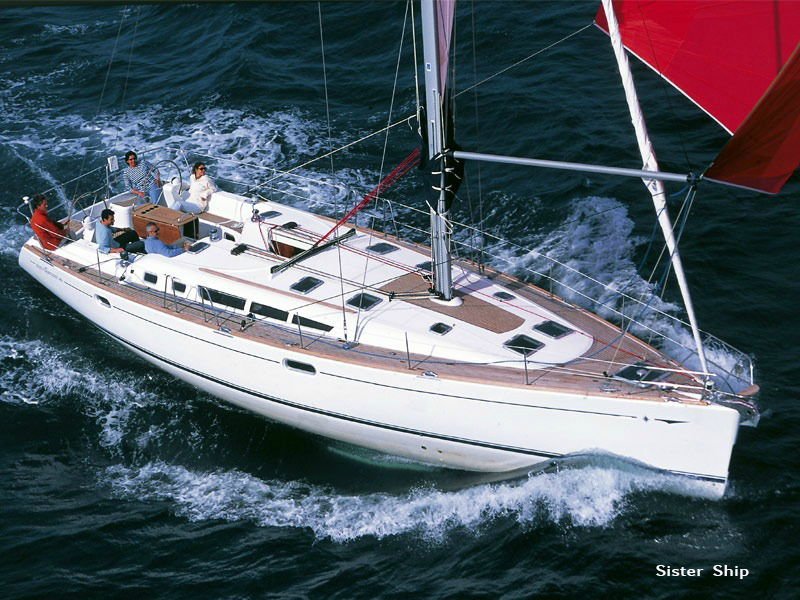 Last update of the post: 20 November 2019
Visits: 118
The Sun Odyssey 49 aims at obtaining two different versions out of a single hull: a Cruising and a Performance version, which is faster thanks to its oversize mast, boom and keel. The Sun Odyssey 49 achieved great success in the second half of the 2000s because of P. Briand’s design, characterized by a smooth and low deckhouse that simplifies lines and handling. The slight height difference allow and easy passage between the different areas, including stern area, while the cockpit of the Sun Odyssey 49 Performance is among the largest of its category, and it can host up to 10 people. The great solution identified for the table base allows better ventilation of guest rooms. Below deck, you’ll be impressed by the width of the saloon, which seems to be even larger thanks to the bright light coming in from the 4 hatches and the 6 portholes, as well as a height of 2 meters. The dinette is slightly raised, while the side kitchen is more than 3 meters long. To the right of the stairs we find the chart area, with an almost 2 meters long table and the comfortable Chaise Longue seat. The flaring detail of the chart table guarantees a comfortable position for arms. The two stern cabins are almost identical, with good ventilation and larger-than-average berths. At bow we find the master area, with large double bed in the middle, a make-up area, several comfortable wardrobes, a spacious bathroom with separate shower enclosure.
JEANNEAU history began in 1957 in Les Herbiers, France. The first sailboat production started in 1964 with the Alizé, that achieved a huge success. In the ‘70s, the shipyard became a true leader in designing and manufacturing livable sailboats, with the amazing Love Love and Sangria, while in the ‘80s Jeanneau began its adventure in powerboat racing alongside the company Transports Graveleau, and it also created the JTA workshop (Jeanneau Techniques Avancées) for the development of hi-tech racing prototypes. Prestige line was born in 1989 and it marked the entrance of Jeanneau in the luxury Motor Yacht industry, with more than 2,500 Prestige models produced so far. In the 90s, Jeanneau joined the Bénéteau Group, that also owns brands like CNB for yachts between 60′ and 94′, Lagoon for catamarans, as well as Montecarlo Yachts for motor yachts between 65′ and 105′. This is the time of Sun-Fast cruiser-racer line, with the launch of the Sun Fast 52, while after 2000 the shipyard further consolidated its success with Sun Odyssey models. In 2014, Jeanneau introduced its boat larger than 60 feet, the Jeanneau 64. Nowadays, Jeanneau has extended its influence to the market of boats with inboard engines, with Leader, Velasco and NC lines. View the online brochure