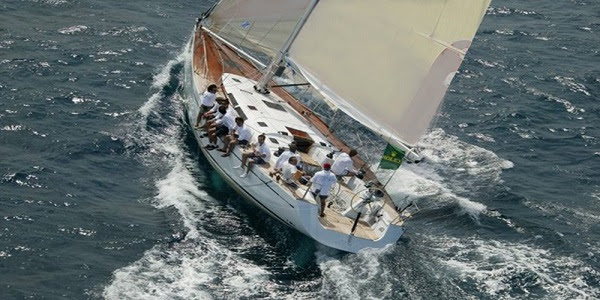 Last update of the post: 20 November 2019
Visits: 42
We all know the COMET 51S from the very beginning because of its elegant and sporty design, that starred in different TV commercials, such as the one for Q8 in a gas station, as well as the Italian TV serial “L’Isola di Pietro 2”. This model stands out for its geometric proportions, characterized by reduced freeboards as well as a low and short deckhouse that enhances side views and broadens the livable areas on deck. The Comet 51S is very appreciated even by the most demanding yachtsmen and it’s starred in many national and international regattas, such as ORCì World Cup and Giraglia Rolex Cup in 2009. It further consolidated its reputation as a fast-cruiser in 2006, with a first overall in the Rolex Capri Sailing Week and ORCì Italian Championship in Cagliari.
With more than 5,000 units manufactured between the ‘70s and the ‘90s, COMAR YACHTS shipyard was at the forefront of the Italian boat-building scenario. The shipyard started by building sailboats between 7mt and 14mt designed by Finot studio. From the ‘80s we find several models designed by D. Peterson, Bruce Farr, Sergio Lupoli and Vallicelli studio. The latter also designed the Genesi 43, a cruiser with innovative designing and building choices, characterized by a central engine, as well as elegant and innovative deck design that highlights side decks. From 1996 on, the shipyard changed ownership and produced more than 1,200 units (from C21 monotype to the carbon-made Comet 103′), all characterized by handicraft production aimed at quality constructions, vinyl ester resins and external finishing in customized fine woods. The efforts of the new owners were rewarded by several international recognitions: Yacht of the Year 2005 and 2006; Best Design Award in 2006, as well as important victories, such as the Italian ORCi Championship in 2006 and the World ORCi Championship in 2008 (in Greece). View the brochure online