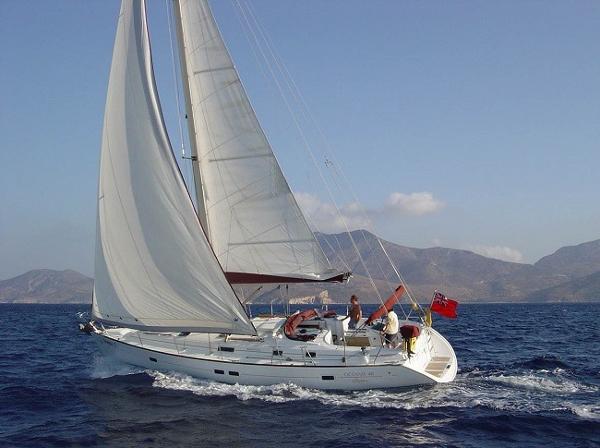 Surely this would have to rate as one of the most successful cruising yachts in the world. The Beneteau Oceanis 411 has found more homes around the world than any other Beneteau. It has been popular as a private yacht and in charter fleets. It has stood the test of time and is still sought after on the second-hand market. First launched in 1996, the Oceanis 411 Clipper is a good-looking yacht with a long waterline and a well-proportioned deck. The tallish two-spreader rig is also in proportion and under sail, they’re an altogether handsome boat. The cockpit of the Oceanis 411 is large, as you’d expect from a yacht that’s nearly 42ft LOA, but that doesn’t detract from the internal volume of the boat. The hull is of laminated GRP with internal fibreglass ribs reinforced with unidirectional rovings. The deck, with bonded bulkheads, is balsa sandwich for stiffness and insulation.

The Oceanis 411 Clipper was designed for easy cruising and the test boat was certainly that, with roller furling on the headsail and in-mast furling on the main and electric winches. Standard deck gear is two Lewmar 40 halyard winches on the cabin top and two Lewmar 48 self-tailing genoa winches on the cockpit coamings. The electric winches on the test boat were a factory option and a good one to look for if you’re after an Oceanis 411. The mainsheet traveller is on the coach roof, which clears the cockpit, and there are six clutches for the control lines. The mainsheet feeds back to the portside coach roof winch. A solid boom vang is also standard fare. The Oceanis 411 Clipper is big and it’s beamy at nearly 13ft. It carries a lot of that beam aft, giving either two large cabins in the stern or a really big one, and an aft galley. For an owner’s boat, the two cabin with the aft galley frees up more space in the saloon. The three-cabin version has the galley along the port side of the saloon, which has a U-shaped dinette and a central settee with storage underneath. It’s still roomy, but a little less so than the two-cabin.
The two-cabin, on the other hand, has a U-shaped dining suite to starboard and a lounge to port that doubles as the nav station. This is more appealing to the eye and offers more scope for entertaining below as well as relaxing. The nav station of the Oceanis 411 on the three-cabin version is on the starboard side near the companionway. 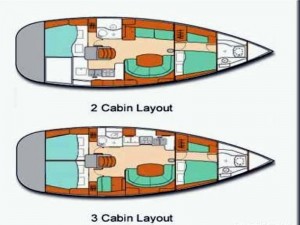 The aft cabins are big, though, and feature a double berth, which is two metres long and 1.45m wide. The two-cabin version, however, gets a king-size bed in the aft cabin, which is two metres long and 1.85m wide. In both versions there’s also a hanging locker, shelving on the hull sides and seat forward of the hanging locker. There is ample ventilation, with opening ports to the cockpit and hatches. There are also fixed ports in the hull for light and to watch the world go by. The forward cabin is light and roomy with another two-metre berth, lockers, a settee, a cabinet and ample shelving. The forward head is in the forepeak and has a manual head with an optional holding tank, vanity unit, shower and accessories. The dayhead is to port of the companionway and also has a manual loo, shower and vanity. The finish is in cherrywood and the benchtops are a serviceable laminex with the overall effect being a cosy interior with plenty of light.

One of the things that a cruiser of this size needs is storage – and plenty of it. The Oceanis 411 offers ample storage all around the boat. The two-cabin version is particularly worthy of a mention here as it gets a huge storage locker on the starboard side of the cockpit where most of the third cabin would normally be. It’s big enough to stow a deflated rubber duck and small engine, water toys, fenders, and extra anchor. All at once.

The Oceanis 411 Clipper has a 50hp four-cylinder Volvo as its standard engine for the Australian market. In the US they used Westerbeke 40hp engines, which is a pretty easy way to spot an imported boat. The Volvo sits in a fairly tight engine compartment under the companionway stairs. The stairs lift for access but there are no gas struts to hold it up. 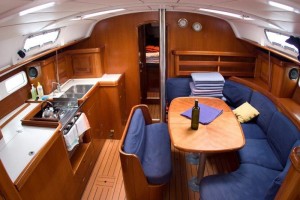 Easily fixed but annoying. There are also hatches in the sides of the engine compartment for access. The controls of the Oceanis 411 are all on the binnacle in front of the helmsman, as is the tacho and fuel gauge. Getting going is as simple as turning the key and casting off. The Oceanis 411 is extremely well manoeuvrable for a big boat, and light on the elm. Apart from a sticky outhaul on the main furling system it is pretty easy to set sail and a snap to trim with the electric winches. This is a big boat, however, and the sails carry plenty of load. The main has good purchase but some might find the genoa a bit of a chore to get in with the breeze up.

The Oceanis 411 Clipper is a solid boat and feels like it when sailing. In the gusts it loads up, finds its angle of heel and sits there. It’s dry and comfortable through the slop. It’s no lightweight, so getting thrown around marks is not its forte. It’s a big, strong cruiser. The Oceanis 411 Clipper is no slug, either, and slightly off the breeze you can reach doing 7.5kts on the GPS with no trouble at all. Downwind, she is comfortable and easy to contol. With a draft of only 1.7m, the Oceanis 411 is well suited to shallow water cruising, yet there is plenty of ballast to keep them stiff.

The Oceanis 411 has wide decks and moulded toerails so the trip forward is not a difficult one. The foredeck is wide and there is an electric windlass for ease of anchoring. The lifelines have a boarding gate amidships and aft, leading to a big swim platform where there is a hot and cold deck shower.

WHAT TO LOOK FOR
A lot of Oceanis 411 went into charter. All the charter boats will be three-cabin versions and fairly Spartan. Being an ex-charter boat is not a major problem but they will have had plenty of use. Look for high engine hours and check for a service history. Also look for worn or damaged door and cupboard fittings. Have the electrical system looked at and check the keel bolts for signs of movement and/or leakage. Have the rigging on all boats checked as it may be nearing the time when it needs to be replaced.