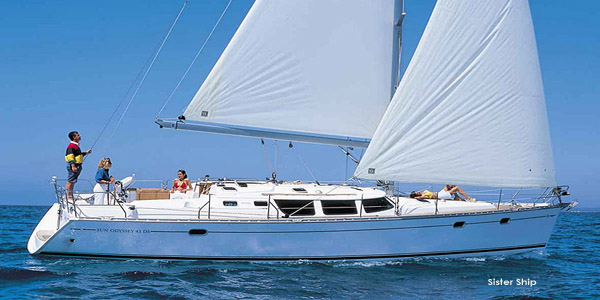 Ultimo aggiornamento dell'articolo: 7 January 2020
53 visite dal 9/07/2018
Introduced in 2000, the Sun Odyssey 43 DS’ hull follows the lines of the Sun Odyssey 43 and Sun Fast 43. The main difference is the Deck Saloon deckhouse, characterized by a large series of squared glass windows that enhances the brightness of the saloon. The Sun Odyssey 43 DS is also characterized by its several ventilation portholes, the under beam hight and modular cabins. This models blends marine qualities with the comfort offered by a Deck Saloon. It’s a great choice for those who love comfortable cruising, without compromises in terms of speed. Thanks to is hull, designed for fast cruising, the Sun Odyssey 43 DS performs very well upwind.
JEANNEAU history began in 1957 in Les Herbiers, France. The first sailboat production started in 1964 with the Alizé, that achieved a huge success. In the ‘70s, the shipyard became a true leader in designing and manufacturing livable sailboats, with the amazing Love Love and Sangria, while in the ‘80s Jeanneau began its adventure in powerboat racing alongside the company Transports Graveleau, and it also created the JTA workshop (Jeanneau Techniques Avancées) for the development of hi-tech racing prototypes. Prestige line was born in 1989 and it marked the entrance of Jeanneau in the luxury Motor Yacht industry, with more than 2,500 Prestige models produced so far. In the 90s, Jeanneau joined the Bénéteau Group, that also owns brands like CNB for yachts between 60′ and 94′, Lagoon for catamarans, as well as Montecarlo Yachts for motor yachts between 65′ and 105′. This is the time of Sun-Fast cruiser-racer line, with the launch of the Sun Fast 52, while after 2000 the shipyard further consolidated its success with Sun Odyssey models. In 2014, Jeanneau introduced its boat larger than 60 feet, the Jeanneau 64. Nowadays, Jeanneau has extended its influence to the market of boats with inboard engines, with Leader, Velasco and NC lines. View brochure.