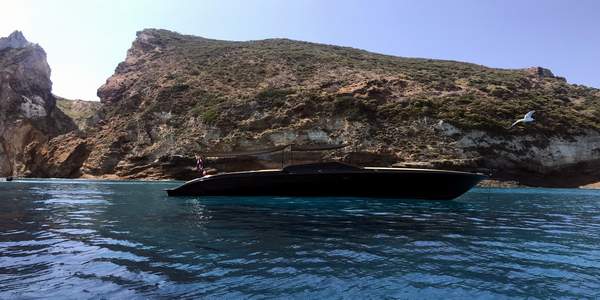 Last update of the post: 30 October 2019
Visits: 136
The Tornado 45 was born in 1995 from a project of the renowned American designer Tom Fexas and from the very beginning it was characterized by smooth lines and a sharp bow that convey force, character and great personality. The Tornado 45 achieved great commercial success, highlighted by the victory in the prestigious off-share race “Venice – Montecarlo” in 1997 with a famous Italian sportsman behind the wheel: Adriano Panatta. In 2008, after a careful restyling of deck and cockpit by Eng. Francesco Guida, the new Tornado 45 was previewed at Genoa International Boat Show.
Fiumicino-based Tornado shipyard (near Rome) was founded in 1968 by the off-shore racer Carlo Marchiolo. The first motorboat manufactured by the shipyard was a 35 footer inspired to the Cigarette lines, that immediately won the attention of the international racing world. Indeed, only a few months after being launched, in 1969, this powerboat inspired to American models won the prestigious Walls Torphy with one of the most famous racers in this category, Vincenzo Balestrieri, who won 28 international races, such as the Viareggio-Bastia-Viareggio in 1970 & 1972, and Naples’ Trophy in 1970. Those were the years of the legenday “Black Tornado”. The first pleasure boats were the result of the shipyard’s racing experience, and they blended comfort and performance by matching the achievements of racing boats with a classic, timeless style. Those were the years following the meeting with Tom Fexas, one of the most brilliant minds of international yacht design, that took place in 1977 at Genoa International Boat Show, and of the Tornado 39 Hawk, Eleven, 44’ Epress and 45’. Between the 80s and 90s, the main model produced by the shipyard was the Tornado 38, another winner of the Venice-Montecarlo race (in 1991). In 2007, the shipyard was renamed Tornado Marine, while in 2016 a new course began, under the guidance of Daniele Parisi and with the introduction of the Tornado 38 New Edition, that followed the tradition but was also inspired to contemporary design philosophies. Since 1968 to date, Tornado manufactured more than 800 boats, half of which were 38 footers. View the brochure online.